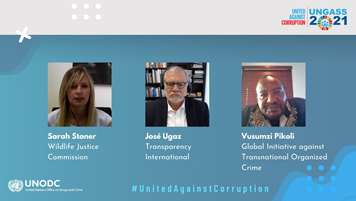 Corruption is a key facilitator of wildlife crime, with criminal networks relying on corruption at every level of their supply chain in order to benefit from their crimes. The reach of corruption in this sphere extends from park rangers to authorities issuing permits to customs officials, all the way up to the very courtrooms where justice should be served. Corruption is built into the structures of the criminal networks participating in wildlife trafficking, illegal logging, and fisheries crime. In order to tackle the problem of transnational wildlife crime, addressing corruption is a necessity.

To discuss this aspect of wildlife crime in more depth, the Wildlife Justice Commission participated in a recent webinar: Leveraging the best tools to address environmental crime enabled by corruption. This online event was hosted by the French Ministry of Europe and Foreign Affairs as part of the United Nations General Assembly Special Session (UNGASS) against Corruption, and featured speakers from the United Nations Office on Drugs and Crime (UNODC), the Global Initiative against Transnational Organized Crime, and Transparency International:

Our Director of Intelligence, Sarah Stoner, spoke about the need for special investigative tools in the context of corruption and environmental crime. Such techniques, as we observed in our recently published report on the convergence of wildlife crime with other forms of organised crime, include controlled deliveries, communication interception and the use of tracking devices, for example. Greater utilisation of these tools, commonly used when fighting other types of organised crime, would enable investigators to gain a wider understanding of where crime convergence may exist between environmental and other serious crime types.

Stoner shared a case study on ivory trafficking that illustrates how the use of special investigate techniques could further the fight against wildlife crime. In July 2017, customs seized 7.2 tonnes of ivory hidden in a shipment of (declared) frozen seafood. This was the largest ivory seizure at that time, with an estimated value of USD 9 million. Despite the size of the seizure (according to CITES guidelines, hauls of over 500 kg of ivory are indicative of the involvement of organised crime) and that three shipping agents were initially arrested (although cases were later dropped), an opportunity to map and understand the reach of the criminal network responsible was missed as no follow-up investigations were undertaken and no special investigative techniques were applied after the initial seizure.

“Wildlife crime and corruption are transnational organised crimes, and as such require tailored responses to address them. By using special investigative techniques, law enforcement authorities are in a better position to evidence how the networks operate, identify those responsible for orchestrating crime and ensure that they are brought to justice.”

We would like to extend our appreciation to the French Ministry of Europe and Foreign Affairs for inviting us to participate in this event, and are grateful to the moderator, panellists, and participants for an interesting and motivating discussion.

Winning big against wildlife crime in 2022