A collaboration between Education for Nature – Vietnam, the National Environmental Police and WJC resulted in one arrest and the seizure of eighteen rhino horn

Vietnam, 26 May 2017: Wildlife Justice Commission, in collaboration with Education for Nature Vietnam (ENV), and the National Environmental Police, began an investigation into the trafficking of rhino horn and ivory by a major trafficking network in Vietnam in December 2016. The investigation has resulted in one arrest and the seizure of eighteen rhino horns. 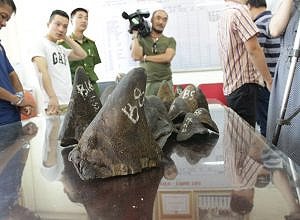 A key breakthrough occurred on 26 May 2017, when the WJC received a tip identifying the location of a large stash of rhino horns in Hanoi. This information was passed onto ENV, sparking a police action by the Hanoi Environmental Police. The following day, Nguyen Anh Son was arrested as he attempted to flee with a box containing fourteen rhino horns. During questioning Nguyen surrendered a further four rhino horns, bringing the total to eighteen, weighing 13.9 kilogrammes in total.

The estimated wholesale value of the seizure is USD $250,000. Investigations into this network are continuing and further arrests and seizures are anticipated.