The report is a comprehensive assessment of the illegal rhino trade and is a much-needed tool for both fighting rhino horn trafficking and conservation efforts. Its purpose it to share strategic intelligence that identifies and provides insights on present and emerging transnational organised crime threats relating to rhino horn trafficking.

The report is set out in 10 chapters covering key elements of rhino horn trafficking, ranging from the criminal supply chain, to use and consumption and the value of rhino horn. It provides an assessment of the threat posed by transnational organised crime to rhinos in 2022, in order to inform law enforcement, conservation, and policy makers’ interventions and ensure the global response to this crime is proportionate and appropriately targeted to current and future needs.

“Rhino horn trafficking remains a severe problem that is driving rhinos to extinction. It needs to be addressed as a transnational organised crime with a focus on those driving and profiting the most from this illegal trade. Law enforcement on its own will not stop the poaching of rhinos or the trafficking of horns, but the full weight of law enforcement has not yet been implemented to address this issue,” says Olivia Swaak-Goldman, Executive Director of the Wildlife Justice Commission.

Although more than 50 countries were implicated in rhino horn trafficking routes over the last decade, six countries dominated the supply chain as source, transit, and destination locations.

A third of rhino horns were smuggled unconcealed, suggesting a potential reliance on corruption to move shipments along the supply chain.

Corruption is the crucial enabler in the trafficking of rhino horn. It is crucial that we address corruption along the whole supply chain.

Rhino horn seizures increased significantly in weight, despite a reduction in poaching.

Large amounts of harvested horns have been diverted from legal stockpiles into the illegal trade with criminal groups exploiting stockpile systems to access harvested rhino horns for trafficking.

There are various types of crime convergence associated with rhino horn trafficking and seizure data indicate there could be crime convergence with firearms, illicit drugs, and other commodities in approximately 10% of cases. 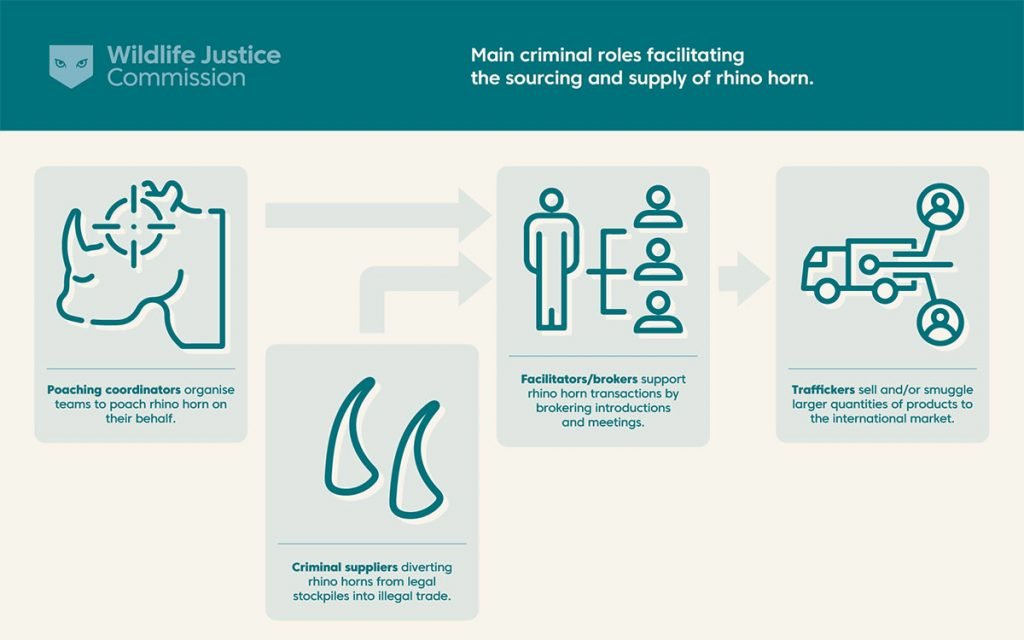 Many standard law enforcement methodologies that should be common practice are still not being adequately applied, such as:

All countries along the trafficking routes need to coordinate their action to address corruption that undermines many law enforcement efforts.

International cooperation is desperately needed to identify and investigate network members located in other countries along the supply chain and involved in the trafficking of rhino horn.

Demand reduction and behavioural change initiatives should be fully informed about the various aspects that drive consumer demand and accordingly more research and investment are needed to improve insight into these choices.

Where should efforts to fight rhino horn trafficking go from here?

“Our analysis of a decade-worth of data is clear: things are improving but much more needs to be done,” warns Olivia Swaak-Goldman. “Rhino horn trafficking is a crime problem, not just a conservation crisis. The international community must move towards an intelligence-led approach to bring down the criminal networks profiting from the illegal trade that is driving the rhino to extinction. Wildlife crime is transnational organised crime, and must be recognised, treated, and tackled as such.”

*Addendum: Please note that a correction has been made to the legend of Figure 2 in the Synopsis and Figure 13 in the full report.

Wildlife Kingpin: The rise and fall of Ah NamWildlife Justice Commission publishes global threat assessment examining the current dynamics of rhino horn trafficking – and how to fight it