The recommendations follow a two day Public Hearing on the Wildlife Justice Commission’s investigation into wildlife trafficking hub Nhi Khe, Vietnam (just 20km from Hanoi). The Panel were presented with findings on 51 individuals, including undercover footage, financial flows and bank accounts, operating transnationally and with impunity, in rhino, elephant, tiger and other endangered species both via shops and social media.

Findings were presented to Vietnamese authorities in January 2016 and supplementary information, after ongoing monitoring, in August 2016. Despite extensive diplomatic effort, very little action was taken, with only one known recent arrest as a consequence of the findings presented.

The esteemed independent panel consisted of international criminal justice and corruption experts. The Vietnamese government chose not to participate in the Public Hearing opting only to send a non-participating observer. Over 300 people attended the Public Hearing in person, plus a large global audience followed via Livestream in Vietnamese and English (including significant numbers in Vietnam) and through live social media updates.

The panel unanimously validated the investigation findings and issued concrete recommendations for the Vietnamese government.

Governments gathering today in Hanoi for the Illegal Wildlife Trade conference, are being asked by the Wildlife Justice Commission to act on these recommendations.

Wildlife Justice Commission Executive Director, Olivia Swaak-Goldman, says, “Some of the most respected voices in tackling international crime have spoken. Their package of recommendations is comprehensive, and it includes what we have long asked for: That the international community support Vietnamese authorities to institute criminal proceedings of a scale consistent with the massive volume of trade in illicit wildlife products in Nhi Khe – and the consequent slaughter of iconic species taking place in Africa to fuel these traffickers’ activities and line their pockets. There is no better time to act than now, with all eyes on Hanoi.” 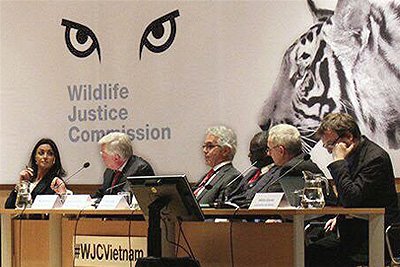 The panel validated the findings in the information provided by the Wildlife Justice Commission to the government of Vietnam in January 2016, and in August 2016, describing the presentation as a fair and neutral description of the facts. They determined that Nhi Khe is, and continues to be, a major hub for wildlife crime in protected species.

The panel acknowledged the positive steps taken by Vietnam, including the government’s pledge during the visit of President Obama in May 2016 and Prime Minister Nguyen Xuan Phuc decree in September 2016; together with recent seizures of large quantities of ivory and rhino horn over the past 12 months, the police inspection of the village of Nhi Khe in June this year and the reported arrest of 4 individuals linked to Nhi Khe village on 12 November 2016.

The Panel also noted deficiencies and on this basis recommended that Viet Nam takes specific actions in compliance with their international legal obligations. Amongst others, that the General Inspectorate Police use the information in the Case File and its update to conduct an investigation targeting individuals and networks identified.

They also made recommendations to other branches of the Vietnamese government including:

Of the 16 recommendations made, other highlights include:

Finally, the Panel recommended that all parties to the relevant international treaties take appropriate measures in support of Vietnam to combat and prevent transnational organized wildlife crime in compliance with their obligations.

We look forward to co-operating with the Vietnamese government.

Olivia Swaak-Goldman, Executive Director, said: “We sincerely hope that Vietnam will initiate serious investigation into the 51 individuals and networks identified through our investigation. With the sheer scale of wildlife trafficking, and extensive criminality involved we cannot afford any more delay. It’s encouraging that we received notice from the Vietnamese CITES management authority that one of these individuals was arrested last week. So much more can be done, as outlined in these recommendations. We encourage Vietnam and the international community to accelerate serious and tangible actions to implement these recommendations immediately and stand near to assist the Vietnamese if required.”

The Designated Independent Review Panel  decision is available to download in English and Vietnamese.

The Wildlife Justice Commission operates globally: ten further investigations are underway and others are in review. A recent investigation in co-operation with Malaysian wildlife authorities, Perhilitan, led to the arrests of 17 traffickers across three transnational networks.