International Tiger Day – It’s International Tiger Day! The magnificent, mighty and powerful tiger is admired for its beauty, elegance and boldness. Tigers are fascinating. As a large predator, they play a key role on keeping their habitats healthy and thriving and local communities can also benefit from the tourism tigers attract. 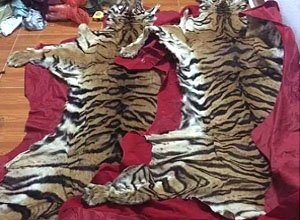 Tigers are the largest members of the big cat family in the world. Their species name is Panthera Tigris. From the nine sub-species that once existed, only six remain: Bengal, Siberian, Indochinese, South Chinese, Sumatran and Malayan tiger. The first three are endangered, the 4th is extinct in the wild and the Sumatran and Malayan are listed as critically endangered. The Caspian, Javan and Bali tiger sub-species became extinct in the 20th century. It is estimated that in the early 1900s, there were around 100,000 tigers throughout their range. Today, an estimated total of around 3,800 tigers exist in the wild.

The main threats to the tiger are the degradation and loss of habitat and poaching. The persistent, illegal market in East and South East Asia for their bones (for traditional medicine use and tiger bone wine), their skins, teeth and claws (for decoration and jewellery) and their meat (considered a delicacy) continues to increase despite the fragile status of tiger populations.

Poaching for illegal trade continues unabated, seriously threatening the survival of these splendid and irreplaceable animals in the wild. Because extinction is forever, we must act now!

Read more on tiger trafficking and our Operation Ambush.

Image: Tiger skins offered via WeChat to our undercover investigators.