23 May 2017: International Turtle Day – A day to celebrate turtles – both freshwater and marine species – and tortoises, raise awareness about the endangered species and encourage action to be taken to preserve them. The main difference between the two reptiles is that turtles live in the water most of the time, while tortoises live on land. Other differences include the shape of their shells (turtles have flat, streamlined shells, while tortoises have large dome shaped shells); their diet (turtles are omnivores, while tortoises are herbivores) and their lifespan (turtles live between 20 and 40 years, while tortoises can live up to 150 years). 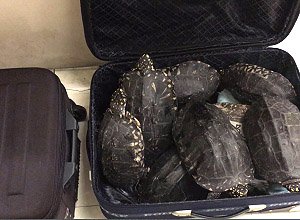 Illegal trade in live freshwater turtles and tortoises for the pet trade and demand for the eggs, meat and shells of marine turtles continues. The demand for the live pet trade, particularly in Asia, is having a detrimental impact on the rich diversity of freshwater turtles and tortoises that exist there. To illustrate the volume of turtles and tortoises being traded today, the Indian star tortoise, was the most commonly seized between 2000-2015, where it is estimated that over 34,000 individuals were removed from trade (CITES, CoP 17, Doc. 73). Similarly, the over-exploitation and illegal taking from the wild of marine turtles, globally, has led to all eight species now being classified as Endangered.

Due to this critical status, it is feared that many species are likely to become extinct within the next few years unless swifter action is taken to address the transnational and ongoing nature of this illegal trade. More needs to be done to combat illegal activity occurring within source, transit and destination countries, where wildlife laws are sometimes poorly enforced. Fortunately, some organizations help enforce those laws and recent arrests have been made with their help, in Malaysia notably. A recent successful coordinated operation between the Wildlife Crime Control Bureau of India, Malaysia’s Wildlife Department (Perhilitan) and the Wildlife Justice Commission resulted in the arrest of an Indian national in Kuala Lumpur and the rescue of 55 live turtles of various species, see press release here. The image represents one of the bags seized during this operation. This cases serves to demonstrate the successful outcomes of joint, partnership working to bring justice to those individuals who threaten such species. The individual in question was subsequently sentenced to two years in prison.

International Endangered Species DayA collaboration between Education for Nature – Vietnam, the National Environmental Police and WJC resulted in one arrest and the seizure of eighteen rhino horn