Operation Jeopardy, a year-long investigation into the trafficking of ivory in Cambodia, has revealed the geographical displacement of this transnational crime in Southeast Asia, with criminal networks moving away from countries with strengthened law enforcement action, such as China and Vietnam, into more vulnerable ones.

The Wildlife Justice Commission’s intelligence-led Operation Jeopardy, launched in May 2019, has evidenced that Cambodia is becoming a significant commercial hub for ivory carving and manufacturing.

Findings of the investigation are detailed in our report The Growing Relevance of Cambodia in the Global Ivory Trade, published today.

During Operation Jeopardy, our operatives documented the impact that the China’s ivory ban, effective since 31 December 2017, and enhanced law enforcement efforts conducted to curb wildlife crime have had on the modus operandi of criminal networks trafficking ivory across the Greater Mekong Subregion. With prices and demand for raw ivory declining, criminal syndicates have switched to processed and carved ivory, which is easier and safer to transport.

Despite the ban, the demand for ivory persists from a Chinese clientele elsewhere in Southeast Asia. Increased law enforcement efforts in countries bordering China such as Lao PDR and Vietnam have had a deterrent effect on the open sale of ivory. However, this trafficking, mainly led by traders of Chinese origin, has gone underground in the region and resurfaced in Cambodia, a country with less enforcement capacity to respond to transnational wildlife crime.

Operation Jeopardy has evidenced that ivory products are smuggled into Cambodia overland, mainly through Thailand and Lao PDR.

Routing of seized ivory shipments relating to Cambodia since 2016 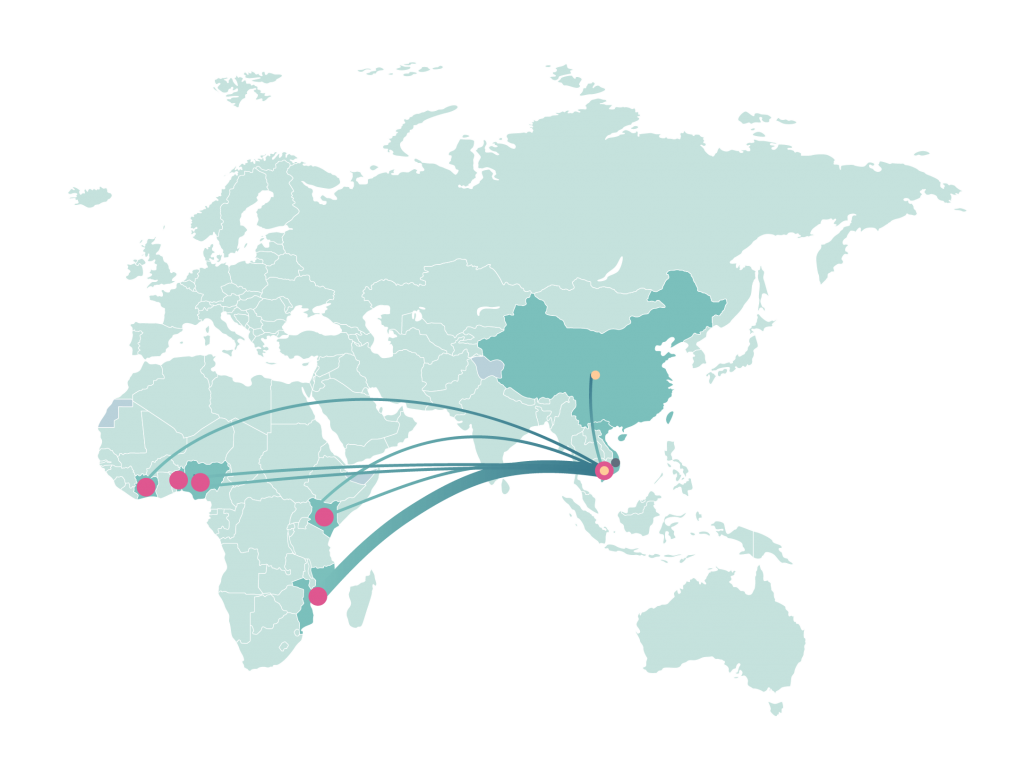 At the start of Operation Jeopardy in May 2019, Wildlife Justice Commission’s operatives identified retail premises in Phnom Penh and Sihanoukville operated by Chinese traffickers offering carved ivory and other wildlife products.

A Phnom Penh-based factory using a wood manufacturing business as a cover was found to be mass producing carved ivory jewellery using computer-operated machinery. This was the first time that the Wildlife Justice Commission has documented the use of machine-operated ivory carving in Cambodia.

A visit to the factory in early 2020 confirmed that it was still fully operational, despite a large downturn in the number of Chinese tourists due to travel restrictions already in place to curb the spread of COVID-19.

We submitted an intelligence report with our findings to the Wildlife Alliance, a local Cambodian NGO supporting the enforcement agency Wildlife Rapid Rescue Team (WRRT). Acting upon our evidence, the WRRT raided the factory in March 2020, arresting five Chinese nationals and two Cambodian nationals and seizing wildlife products, including ivory, tiger bones, pangolin scales and dried seahorses. One Chinese national was later charged with wildlife offences.

Undercover footage taken by our operatives during Operation Jeopardy revealing the commercial scale production and sale of carved ivory in Cambodia.

As recently as May 2020, our investigators have received offers of wildlife products from traffickers in Cambodia, including raw ivory tusks priced at USD 1,600 per kg, evidencing the persistence of ivory trafficking despite the  raid.

Increased political will and law enforcement efforts to tackle transnational wildlife crime in China and bordering countries has shifted the open ivory trade to more vulnerable countries, such as Cambodia, with lesser capacity to fight it.

International and intelligence-led law enforcement cooperation is crucial to address any form of transnational organised crime. The trafficking of wildlife is no exception. Cross-border collaboration, including the sharing of intelligence, can increase the effectiveness of efforts to address the illegal ivory trade across the Greater Mekong Subregion.

Read here:
The Growing Relevance of Cambodia in the Global Ivory Trade

World Elephant Day: No room for complacency in the fight against ivory trafficking