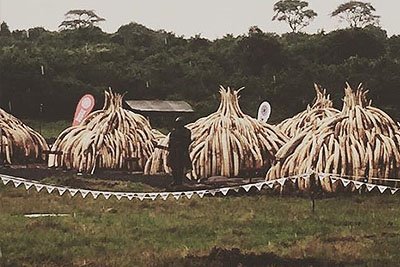 The Kenya Ivory Burn is intended to underline the country’s determination to curb poaching. It sends a strong message.

President Kenyatta will light the torch in Nairobi National Park, watched by heads of state, wildlife experts and conservationists, Hollywood stars and many others. Our Supervisory Board member, Andrea Crosta will be in attendance representing Wildlife Justice Commission.

The ten pyres of ivory shockingly represent the deaths of at least 4,000 elephants.

The Wildlife Justice Commission is working to expose and disrupt the criminal networks responsible for transnational, organised wildlife crime. Our simple image, below, illustrates the ‘supply and demand’ decimating Africa’s elephant populations, poached for their ivory. Impacting not only the species itself, but local communities and nations.

The WJC announces the appointment of a new Executive DirectorKey Findings: Operation Ambush