The Wildlife Justice Commission’s Intelligence Development Unit has analysed the effect that global measures imposed since January 2020 to contain the spread of COVID-19 are having on wildlife trafficking dynamics. Our new report concludes that trafficking continues despite restrictions, albeit at a reduced scale, and that high-level criminal networks are adapting to resume operations to previous levels.

Crime does not stop

The global public health emergency provoked by the outbreak of the new coronavirus has impacted lives across the globe. There have been unprecedented shutdowns and travel restrictions to contain the widespread transmission of the disease, resulting in an immediate effect on people’s lives and businesses, and organised crime networks have not been immune.

Crime analysts at the Wildlife Justice Commission’s Intelligence Development Unit have assessed the organisation’s findings from the trade between January and April 2020 and the reported seizures made during that period to arrive at state of the art intelligence on the criminal dynamics.

The analysis concludes that COVID-19 prevention measures have affected wildlife trafficking operations. But as crime does not stop, it is likely that the current lull will only be temporary, as wildlife brokers have already made clear that they intend on returning their operations to previous levels as soon as possible.

Timeline of observations and key events

Intelligence collected by the Wildlife Justice Commission highlights that border closures and travel restrictions are having a significant impact on wildlife trafficking operations, especially in Asia, where traders are facing challenges to access Chinese markets and sell their stock of wildlife products.

Difficulties transporting ivory into China are resulting in the stockpiling of large quantities of raw ivory in Vietnam, Lao PDR and Cambodia. This stockpiling trend in ivory trafficking, which we already identified last year, has increased since January. All of which have a knock-on effect on the street value of raw ivory, which has experienced declines since 2015.

The Wildlife Justice Commission also believes that stockpiling of large quantities of pangolin scales is now occurring in Vietnam. During the first three months of 2020, Vietnamese traders offered more than 22 tons of pangolin scales to our investigators. With the growing difficulties and reduced profitability in ivory trade, pangolin scales could be substituting ivory in the illegal market in China.

The Wildlife Justice Commission’s analysts have also observed changes in transportation methods of wildlife contraband. Security measures on air transport have impacted criminal dynamics, as traffickers are not guaranteed that the shipment or courier will arrive at their airport of choice. Sea and road transport remain as alternative options; wildlife products are still arriving or due to arrive via sea as some may have been sent pre-lockdown, as recent seizures have illustrated. Brokers are keeping abreast of travel restrictions and are closely following developments at the Chinese border. China’s law enforcement agencies have reported several seizures of wildlife commodities that were transported by road from Vietnam. 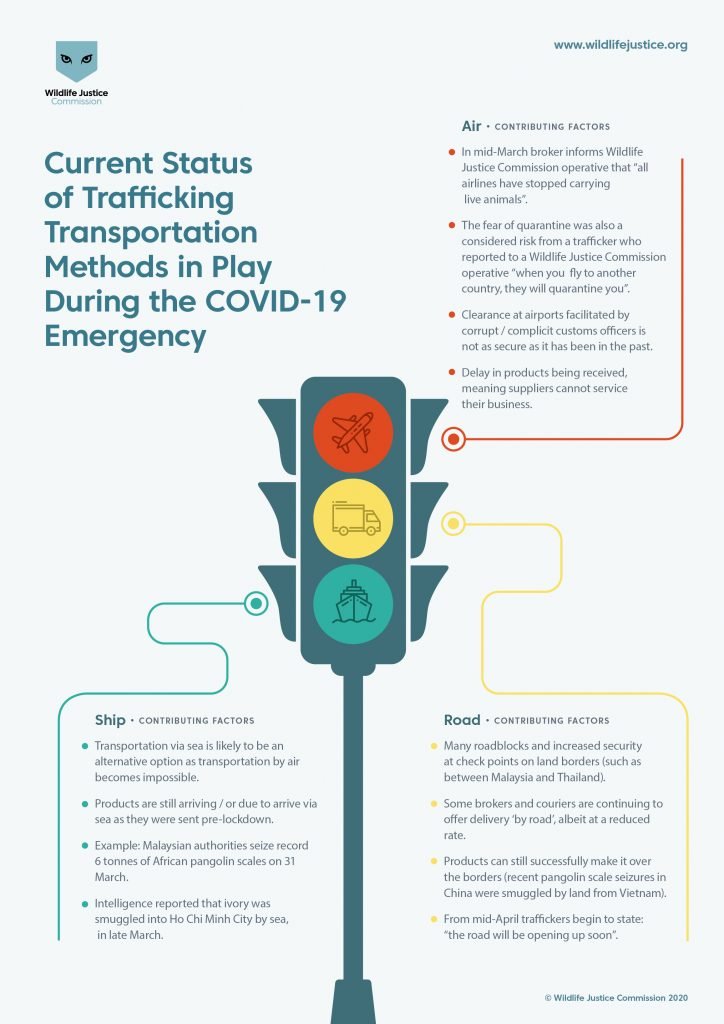 View the infographic
READ THE REPORT
READ THE MEDIA RELEASE

Read here:
Rapid assessment of the impact of COVID-19 on wildlife trafficking

Measures we have taken regarding COVID-19Measures to curb COVID-19 impact wildlife trafficking but organised criminal networks are still active and gearing up to increase operations, says new report