Key findings of Operation Ambush: The illegal tiger trade in Asia. Operation Ambush provides insight into the journey tigers take to market, and how this is facilitated by organised criminality. The growth in unregulated and private breeding may be enabling illegal trade, at the same time wild tigers are being targeted to service demand in Vietnam and China.

The Wildlife Justice Commission (WJC) is a non-governmental organisation based in The Hague, The Netherlands. It was established in March 2015 with the goal of exposing and disrupting transnational organised wildlife crime. The WJC is staffed with former law enforcement officers, analysts and lawyers from the United States, Great Britain, Australia, the European Union and several Asian countries.

In 2014 the CITES secretariat reported that seizures of tiger specimens had increased in Southeast Asia in recent years, and that, of 61 live tigers seized in the period 2010–2012, 74% were confiscated in three South-East Asian
countries: Laos, Thailand and Vietnam. A seizures analysis commissioned by the secretariat highlighted concerns about the source of tigers in illegal trade, in light of the presence of tiger breeding facilities in these countries and the small numbers of wild tigers (SC65 Doc. 38).

Operation AMBUSH began in July 2016 and aims to examine the drivers and organised criminality behind the illegal tiger trade across Asia with a particular focus on the role of tiger farms in the Greater Mekong region. This brief presents preliminary results, based on our undercover investigations in Vietnam, Laos and Malaysia, open source research and intelligence obtained from governmental and non-governmental sources.

Here we present a snapshot of our findings on a relatively small scale, however, the findings are representative of the wider issue that tigers bred in farms are being supplied into illegal trade. 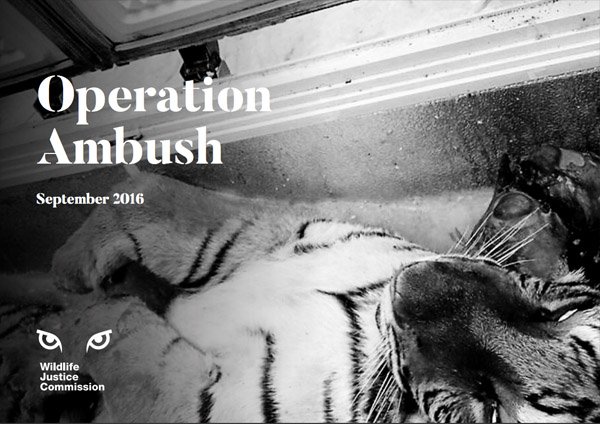 Using intelligence analysis to save tigers in Southeast Asia