Operation Medusa: An investigation into the illegal ivory and rhino horn trade

The Wildlife Justice Commission initiated Operation Medusa in 2016 to delve into the illegal ivory and rhino horn trade in Vietnam and to gain deeper insight into the Africa-Asia supply chain. Ah Nam was first introduced to Wildlife Justice Commission operatives in June 2016. By January 2017, his criminal role had grown to such an extent that he became the main focus of Operation Medusa and related investigations. By 2019 he had asserted his position as one of Vietnam’s top wildlife criminals, acting as the lead broker for a sophisticated criminal network responsible for trafficking vast quantities of elephant ivory and rhino horn from Africa to China via Vietnam.

Over the course of our three-year investigation, the Wildlife Justice Commission documented Ah Nam’s access to a minimum of 17.6 tonnes of raw ivory (valued at more than USD 9 million), and 477 kg of rhino horn (valued at more than USD 8 million), based only on what operatives directly observed and verified during that period. This quantity of product is estimated to equate to the killing of approximately 1,760 elephants and more than 106 rhinos, and still represents only a fraction of what he is likely to have trafficked. To illustrate the level Ah Nam operated at, in August 2017 he provided an undercover operative with an image of 76 rhino horns. This was the largest number of raw rhino horns the Wildlife Justice Commission has ever been offered in a single transaction.

Taking down a wildlife kingpin

The Wildlife Justice Commission’s investigations into Ah Nam and his network resulted in a wealth of intelligence and evidence. This information on Ah Nam and his key associate, Duong Van Phong (referred to in the report as Ah Phong), was compiled in a detailed Case File, which we provided to the Vietnam Environmental Crime Police and the Anti-Smuggling Bureau of China Customs in December 2017. The two men were partners in crime for the entire period of the investigation and were eventually arrested and convicted together.

Ah Nam was arrested in September 2019 in connection with the illegal trade of 204 kg of ivory – a deceptively small quantity compared to the volume of wildlife products he is known to have trafficked during the three years he was under investigation by the Wildlife Justice Commission. He was convicted on 16 July 2020 and sentenced to 11 years in prison.

The Wildlife Justice Commission’s intelligence and investigation support directly contributed to the arrests of 12 other individuals in Vietnam – 10 of whom were imprisoned and two were released without charges – and the seizure of 1,428 kg of ivory and 18 rhino horns. 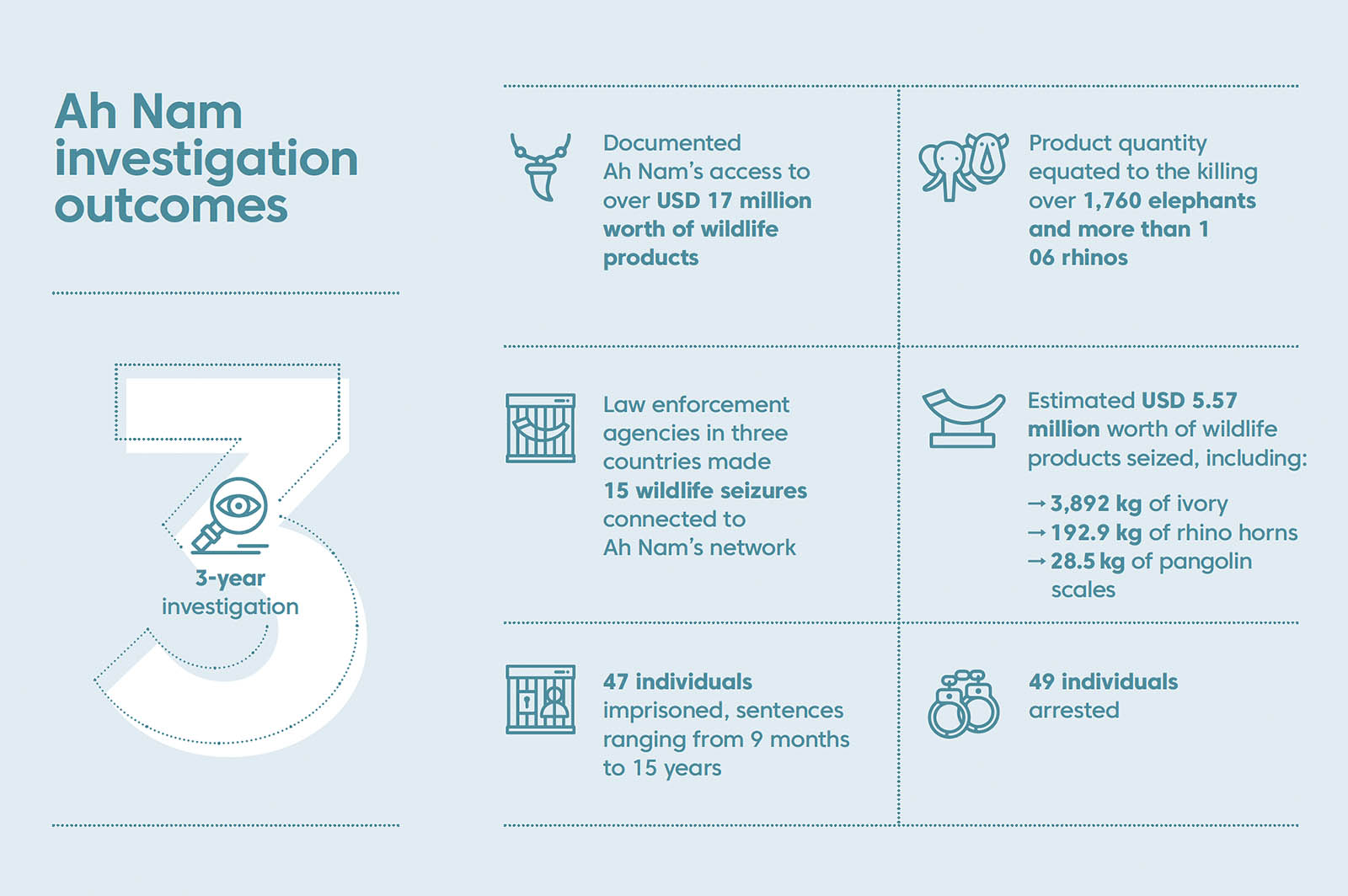 A significant impact on wildlife trafficking in Vietnam

During the course of the investigation into Ah Nam’s network, at least 2,887 kg of ivory and 162.9 kg of rhino horn are known to have been seized across three countries, and 20 individuals were imprisoned, showing the extent of law enforcement efforts and the international reach and consequences of Ah Nam’s operations.

His arrest and imprisonment represent a meaningful step forward for Vietnam’s law enforcement authorities in combatting organised wildlife crime. The removal of one of the most prolific wildlife traffickers has severely disrupted this criminal network, and, due to Vietnam’s role in the transnational illegal wildlife trade, the impact has extended across the region and globally.

Ah Nam’s conviction and heavy penalty also sends an important message: the risk-reward ratio for wildlife crime is changing in Vietnam. Analysis of published court judgements in China shows that additional cases linked to Ah Nam have continued to be prosecuted and convicted, while the Wildlife Justice Commission’s investigations have found many Vietnamese traders are no longer operating due to the increased fear of arrest and difficulties in smuggling products across the border into China.

The Wildlife Justice Commission continues to work with Vietnam and other countries impacted by wildlife crime to assist with developing and analysing intelligence, and by conducting intelligence-led investigations to help disrupt and dismantle transnational wildlife crime.

To skin a cat: How organised crime capitalises and exploits captive tiger facilities

Bringing down the Dragon: An analysis of China’s largest ivory smuggling case