Over the last century, the wild tiger population has decreased to alarmingly low levels. While tigers are adversely affected by climate change, habitat loss and human-wildlife conflict, the illegal tiger trade is said to be the most imminent threat.

For the past six years, the Wildlife Justice Commission has been investigating tiger-related crime in the Greater Mekong Subregion under Operation Ambush. Today, we publish our findings in a compelling new report: To skin a cat: How organised crime capitalises and exploits captive tiger facilities.

Tigers are classified as a CITES Appendix I species, meaning they are threatened with extinction. Despite this, the world’s biggest cat is still being trafficked – particularly in parts of Asia – to meet an unrelenting demand for traditional medicine, jewellery, décor, and pets. Although international trade in tigers has been prohibited since 1975, during the six-year investigation of Operation Ambush, we identified numerous organised crime networks which supply the entire spectrum of the illegal tiger trade, ranging from canines and claws to skin and bones, and even live tigers.

Tigers also continue to be bred in both legal and illegal captive facilities – otherwise known as tiger farms. Our new report closely examines the role of such facilities in enabling tiger-related wildlife crime in Southeast Asia. While poaching remains a significant concern, the intelligence and evidence we collected under Operation Ambush suggests that tiger farms in the Greater Mekong region – especially in Lao PDR, Thailand, and Vietnam – present a significant threat to the survival of tigers across Southeast Asia.  Contrary to claims that captive tiger breeding facilities promote and encourage conservation, the Wildlife Justice Commission’s findings suggest the opposite; tiger farming actually perpetuates the supply and demand for the illegal tiger trade run by organised crime networks.

Organised crime networks operating in Lao PDR, Thailand and Vietnam are central to supplying the demands of the illegal tiger trade throughout Southeast Asia; they appear to use Lao PDR as a hub to launder tigers and their parts. Analysis conducted by the Wildlife Justice Commission suggests that Lao PDR and Thailand are the primary source for live tiger cubs destined for the pet trade in Thailand.

Tiger farms in Lao PDR also appear to cater to Vietnamese and Chinese clients. Vietnamese organised crime networks, while maintaining their own farms, also appear to regularly import live and dead tigers from counterparts in Lao PDR and Thailand.  Every part of the tiger represents potential profit to traffickers; tiger bones are boiled down to a paste, their skin is treated and dried, and their teeth and claws are extracted and polished.

The tiger trafficking community is closely connected and operates cohesively, facilitated by corruption, ensuring a steady stream of clients and product. During Operation Ambush, the Wildlife Justice Commission’s undercover operatives visited several tiger farms, and interacted with many traffickers who also had access to ivory, rhino horn, pangolins, bears, primates, and rosewood, indicating that they deal in a variety of high-value wildlife commodities.

Some countries that have been heavily affected by the illegal tiger trade have made great strides in their efforts to detect, disrupt and prevent wildlife crime through policy and enforcement improvements, thereby leading to increased seizures, arrests, and charges. Several countries are also committing to forward-thinking strategies like the application of DNA testing to identify illegally farmed tigers and prevent them from entering the illegal trade.

As a result of collaborative efforts between the Wildlife Justice Commission and law enforcement agencies in Lao PDR, Thailand, and Vietnam, Operation Ambush successfully dismantled well-established criminal networks, resulting in the arrests of 18 individuals and the seizure of a live tiger cub – which originated from a farmed source. 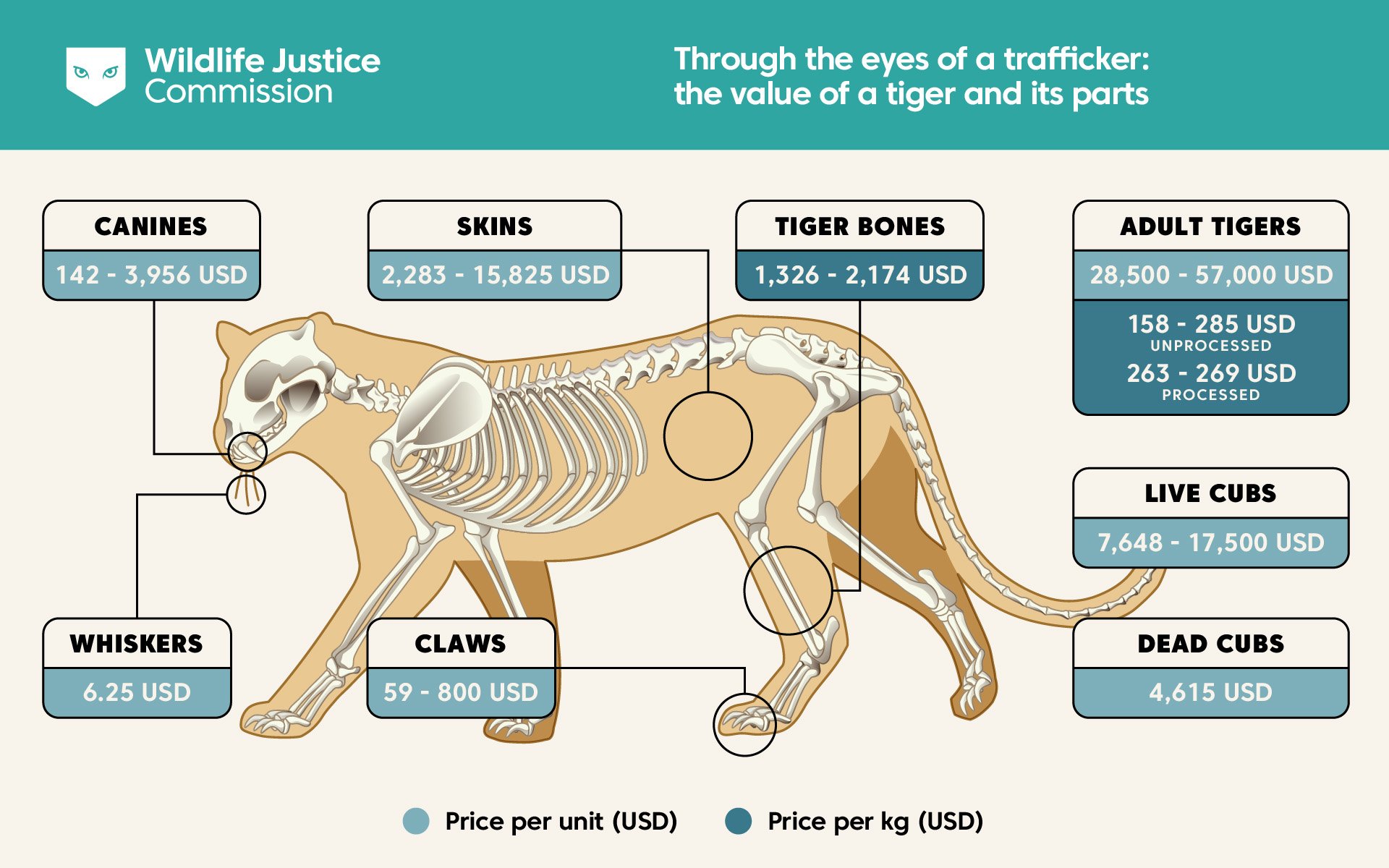 How can we use this momentum moving forward?

More must be done to protect tigers and other big cats. Corruption continues to facilitate tiger- and wildlife-related crime; any efforts to address illegal wildlife trade must go hand-in-hand with efforts to fight corruption. Tiger trafficking continues to be enabled by a lack of domestic policies on non-native species, such as ligers, and by a tolerance for captive breeding facilities and commercial trade.  We encourage countries impacted by the trade to act on even broader enforcement and legislative improvements.

“The intelligence and evidence collected through Operation Ambush clearly demonstrates that transnational organised crime networks continue to prosper from the exploitation of captive tiger facilities. However, it represents only a fraction of the activity occurring within the illegal tiger trade in the Greater Mekong region,” warns Wildlife Justice Commission’s Executive Director, Olivia Swaak-Goldman.

The solution cannot be achieved by one country or organisation alone. Gaps can only be closed by sharing intelligence, collaborating on investigations, and committing to ending the illegal tiger trade together.

In this Lunar Year of the Tiger, there is a palpable, renewed motivation to protect the world’s largest big cat. Together, we must maintain this momentum and ask tough questions about the rationale of maintaining tiger farms that are known to engage in the criminal diversion of tigers into the hands of organised crime groups.

Bringing down the Dragon: An analysis of China’s largest ivory smuggling case