Kuala Lumpur, 15 March 2017: Following a successful collaboration between the Wildlife Justice Commission and Malaysia’s Department of Wildlife and National Parks (Perhilitan) in August 2016, four suspects were arrested in relation to the seizure of approximately 400 kilograms of ivory in Kuala Lumpur. Two of those individuals have now been prosecuted and sentenced.

Olivia Swaak-Goldman, Executive Director, Wildlife Justice Commission, said: “We are very pleased to have another successful collaboration with Prehilitan leading to seizures, arrests and convictions. The partnership between the Wildlife Justice Commission and Perhilitan on Operation Chameleon demonstrates the Malaysian Government’s exemplary commitment to the fight against wildlife crime.” 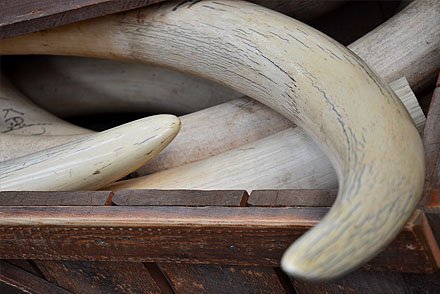 On 14 March 2017, two of the four suspects, Malaysian nationals LIM Yan Chun and LIM Len Beng, pled guilty to offences under section 68(1)(b)* of the Wildlife Conservation Act 2010 at the Sessions Court in Selayang. The court handed down the sentence of a fine of RM10,000 (USD2,200) or 12 months imprisonment if the fine is not paid.

The matters of the two other suspects are still before the court.

* Article 68(1)(b) makes it an offence for any person who takes or keeps any part or derivative of a totally protected wildlife without a special permit. This offence is punishable with a maximum fine of 100.000 MYR or a maximum imprisonment of 3 years.