Wildlife crime is happening globally, on an industrial scale. It is not only iconic species which are affected. Many lesser known species face imminent extinction. On International Endangered Species Day we would like to acknowledge a critically endangered species that does not get much attention – The Helmeted Hornbill. 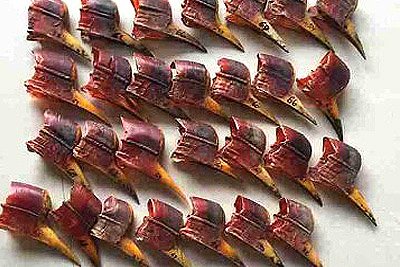 The Helmeted Hornbill is poached for its casque, known as red ivory. These casques (the extended area above their beaks) pictured represent 34 of these critically endangered birds. Illegally hunted in Borneo & Sumatra for their casque, then traded as ‘red ivory’ for carving into ornaments. These giant birds (2m wingspan) are extremely close to extinction. The helmeted hornbill is illegally traded at prices of up to 5 x higher than ivory.

A WJC investigation targeting transnational reptile smugglers resulted in a successful coordinated operation between the WJC, the Wildlife Crime and Control Bureau of India and Malaysia’s Perhilitan policeInternational Turtle Day